Perogies. Some people call them varenyky. They are pasta dumplings, commonly stuffed with potatoes and cheese, and to me they are comfort food. You can boil them or fry them, and serve them with sauteed onions and sour cream.

Making your own perogies is economical and can greatly reduce the sodium content over store-bought. Mrs T's Potato and Onion variety contain 390 mg of sodium for three, and three of their Potato and Cheddar contain 510mg. Schwanns perogies contain 570mg sodium for the same portion. That seems tame, but who eats only 3 perogies? 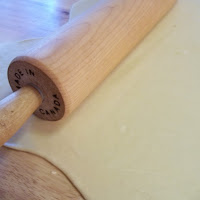 In a bowl, combine the water, olive oil, egg and salt. Whisk until the mixture is frothy.

Add four cups of the flour, scraping the sides of the bowl as you stir. When you have a sticky ball of dough, turn it out on the counter and knead in the rest of the flour. Knead another five minutes. 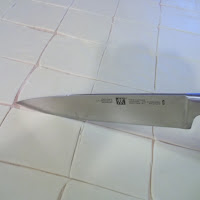 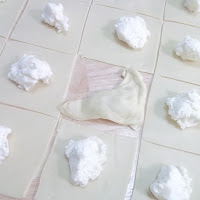 Place a spoonful of filling on each square. Make the amount just enough that you can fold over the square and make a triangle. Seal he edges of the triangle by pinching the dough together. Fill and form each perogy. (If you end up without enough filling or have odd edges, mash the scraps together into a ball to re-roll. The dough will make great noodles when sliced into thin strips.)

Place the perogies in boiling water, about six or eight at a time, depending on the size of your pot. When they are cooked they will float. Take them out of the water with slotted spoon. Melted butter will keep them from sticking together.

[Alternatively, place unboiled perogies on cookie sheets and freeze until solid. Place them in zip-locks and take out as few or as many as you would like to cook at a time. Just pop them in boiling water. They will be just as convenient as store-bought, only much, much better.]

In this recipe, we used homemade cottage cheese, which has far less sodium than store-bought. You could also use cheddar with potatoes. Some people use sauteed sauerkraut or prunes as filling.


This post is linked to Sunday School, Tutorial Tuesday at Hope Studios, Make your own! Monday and Ultimate Recipe Swap.
Posted by Stealthy Mom on Friday, November 04, 2011