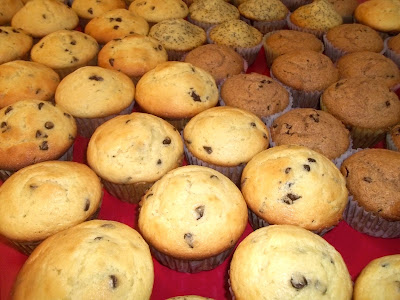 On Saturday, a powerful set of storms ripped through the Midwest. Two towns in our area- Thurman and Creston, Iowa- were hit pretty hard by tornados. About a hundred people from Thurman became homeless, as 90% of their tiny town was damaged. 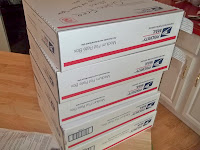 Of course we wanted to help somehow. Showing up with wee ones to a disaster area would not be a great idea. Why not bake up a bunch of muffins? Anyone stuck in a shelter would be grateful for something to eat that did not come wrapped in cellophane, right? While I mixed and poured, Stealthy Dad made a run to the grocery store and kept the kids entertained. We made chocolate chip, raisin spice and lemon poppyseed muffins, regular and gluten free. Ten dozen in all.

We loaded up the kids and drove off to the high school in Tabor, where the Red Cross had, according to news reports, set up a shelter. At the shelter we found a single volunteer, bored and lonely. No one had come in, which is typical with rural disasters where people can get to friends' and family's homes. She let me know that even if there were people staying there she could not accept the muffins. The Red Cross does not allow homemade goods to be distributed to people in their care. Since the Red Cross had a presence at the disaster site too, she indicated that if I took the muffins to Thurman I would likely be turned away. I gave her half a dozen to take home and was on my way.

Thurman was a zoo. The area was blocked off to through traffic but a police officer directed me to go to City Hall. Stealthy Dad waited in the car with the kids while I carried the boxes of muffins to the  designated refreshment area for the 900 people who had showed up to help. No one stopped me as I carried the boxes through the crowd of volunteers working and politicians posing for photo ops. There were Salvation Army volunteers distributing food at the refreshment area, and they thanked me. Apparently the Salvation Army is more interested in helping people that protecting seven-figure salaries from liability. My heart was lighter, and so was our trunk as we got back on the road.