Several months ago, I emailed Clabber Girl Corporation to thank them for offering a non-GMO baking powder. Rumford is non GMO and aluminum-free. The company sent me a generous sample of the Reduced Sodium version to try. (The sample arrived just before the heat wave, so it was a while before I could go anywhere near the oven. )

Would reduced sodium baking powder get the same results? To find out, I baked up two batches of Butter Biscuits using both versions of the baking powder.

Here is my Butter Biscuit recipe, adapted from the Tea Biscuits recipe in the Five Roses: A Guide to Good Cooking book:

Mix the dry ingredients together in a bowl. With a pastry blender or two knives, cut the butter in until the mixture is crumbly like corn meal. Pour in the cold milk all at once and stir until a dough forms. (I gently take the dough and knead it two or three times on the table. You don't want the heat of your hands to soften the butter, so be careful with this step.)

Roll the dough into a rectangle between half to three-quaters of an inch thick. Cut the dough lengthwise, then widthwise, to make squares. It does not matter how large they are, as long as they are fairly even. Gently round the corners of the biscuit squares with your fingers.

Place the biscuits on an un-greased baking sheet, and bake for 11-14 minutes, until golden on the tops and bottom.

A batch of each, baked side by side.... Would there be a difference? 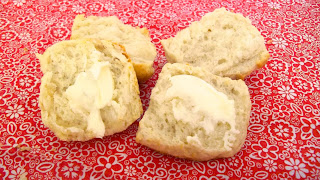 Flaky, tender....  (Go ahead and slap my hand for spreading butter on biscuits made with butter. Want one? ) 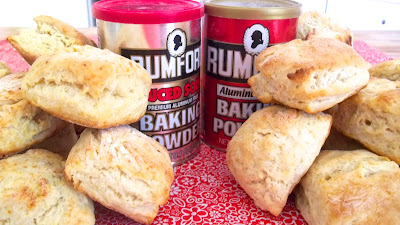 Butter Biscuits baked with both versions of non-GMO Rumford Baking Powder turned out the same. That is great news for reduced sodium bakers!